Mating mates: Just a theory I happen to agree with 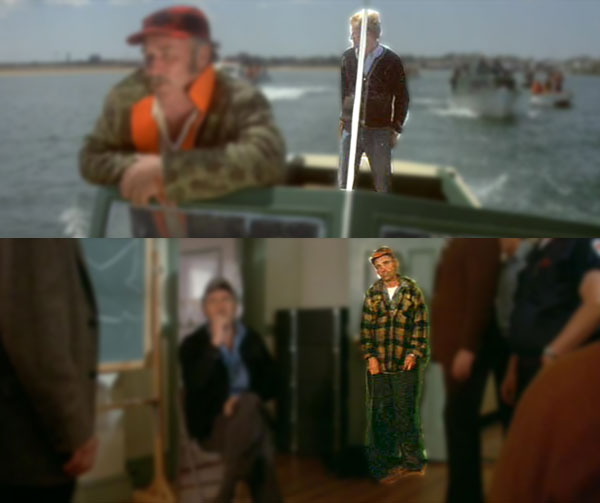 The mates of Ben Gardner and Quint are seen briefly, say nothing, and disappear. But not in the jaws of a Great White Shark; into the arms of each other. How else to get out from under the shadow cast by their masters?

So what happened to Ben Gardner’s assistant? He can be seen loading up Ben’s boat(Green hull)when Hooper arrives (You can see the top of his head and back in your posted photo of Hooper and Gardner on the dock) and he’s in the boat when Gardner’s soliloquizing “Wait’ll we get them silly bastards down on that rockpile…..”.
Did the shark eat him too?

Damn fine question. According to the book, Gardner’s mate is referred to by Brody as “Danny-what’s-his-name” and didn’t accompany Gardner on what would become his boss’s final hunt due to “something about a dentist’s appointment.” (In the book, it is Hendricks who finds Ben Gardner’s boat with Brody, not Hooper.)

In the movie, someone fitting the description of a Danny What’s-His-Name helps Gardner at the dock and accompanies him on the Yahoos’ shark hunt that nets the red herring Tiger.

But we never see Danny again in the movie. Was he so overshadowed by Ben that even his devourment meant nothing, too?

Danny and Quint’s similarly unheralded mate were always in the background while their bosses held forth.

No. I believe that, realizing they were to be cast into the chum buckets of history, Ben Gardner’s mate and Quint’s mate eloped to Provincetown and opened a sculpture studio.

“Carl and I were together for 20 years,” says Danny (whose last name happens to be Parker), sitting on a comfortable sun porch in Falmouth, within sight of Vineyard Sound. A smiling picture of his late partner, Carl, stands on a table by his side.

“Carl talked about Quint for the first few years,” Danny, now 65, says. “How he’d been there on St. Patty’s Day in Boston, the arm-wrestling competition in San Francisco, the time in Montauk. Little things like going to the store to get piano wire. Quint never acknowledged he was there, even though they shared a dog, Flicka.”

“No one remembers this, but ‘Flicka’ was also the name of Ben Gardner’s boat,” Danny says, his eyes misting. “Some time around July 10 of 1974, after it was all over, I met Carl on Kintner Beach. Flicka ran right up to me, and I couldn’t help but think of Pippet. But then I saw Carl. At the dentist, I’d had some bridge work done.

“After all this talk of ‘Jaws,’ Carl said I had a nice smile.”