We need a candidate who acts in our best interest, who is a coalition builder, who doesn’t traffic in fearmongering, who seeks proof, who is decisive, who admits mistakes, and whose kids are on that beach, too.

Mayor Vaughn is the steward of a summer town. A town that depends on summer dollars. He hasn’t read the crackpot theories that Matt Hooper has about the territoriality of sharks, because he isn’t a reader; he is a signer. When he earnestly asks for proof of the shark’s tooth that Hooper said he extracted from Ben Gardner’s boat, Hooper can’t produce it. Do you want a president who will perform a half-assed autopsy of your rights? Vaughn is clearheaded.

Mayor Vaughn does see the “sick vandalism” of Amity’s 50th Annual Regatta billboard, perpetrated by “paint-happy bastards.” Vaughn demands Brody bring them to swift justice. Vaughn is a man of action and responds to what is in front of him. He is decisive.

Mayor Vaughn creates a coalition of the media, business, and medical establishments and reaches out to Chief Brody, saying he doesn’t want “a panic on our hands on the Fourth of July.” Yet when Brody is told that the coroner’s report must be amended from “shark attack” to “boating accident,” he is incensed. Brody cannot adapt to change. But Vaughn is pragmatic. “Look fellas,” he says to America. “Let’s be reasonable.”

Vaughn does not traffic in fear. 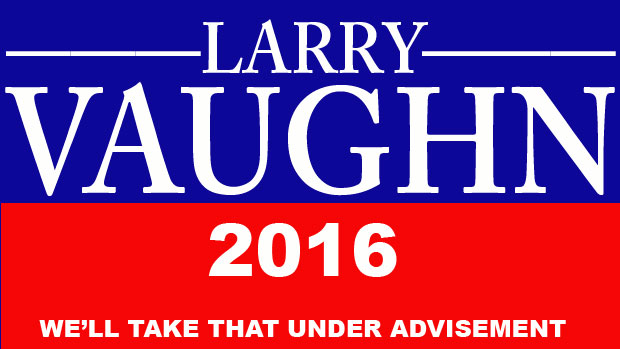 Mayor Vaughn is not swayed by excitable naysayers like Hooper and Brody, who not only want to close the beaches, damning the island to a long winter of welfare, but also want to open the public coffers to the expensive fancies of Quint, who demands $10,000 plus lunch, apricot brandy, Iranian caviar, and a color TV. Unimpressed with hysteria, Vaughn counters that, not only will the summer be saved, but it will also be “the best Fourth of July we’ve ever had.” He knows how to delegate, and is not a Negative Nellie.

Mayor Vaughn is always on the lookout for graft. In addition to pate de fois gras, Quint wants zoning concessions from the town independent of whether he catches the shark or not. Vaughn would not agree to that.

Mayor Vaughn admits his mistakes. We know from the book “Jaws” that Amity’s mayor was in bed with the Mob and thus had a financial interest in keeping the beaches open, despite growing evidence of a resident killer shark. While the Mob element was removed in the movie, Vaughn acted “in the town’s best interest” to keep the flow of tourists’ “summer dollars” unimpeded. But when the shark goes into the pond and eats the Estuary Victim, Vaughn sees his error. He accompanies the survivors to the hospital. He signs the voucher and hires Quint to kill the shark. His kids were on that beach, too.

Larry Vaughn is a father, an administrator, a team builder, and a decider. In November, let’s take him under advisement.