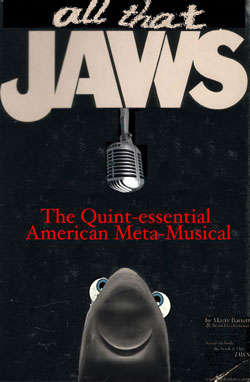 After nearly two years at sea, we’ve recorded a series of demos in advance of a theatrical run of All That Jaws in Los Angeles. We’re indebted to Erik “Great Whitis” Petraitis for his engineering services and the Bellflower Music Center for a fortuitous Baritone Horn rental.

The following songs are representative of the dozen or so pieces that make up the rock opera. We handled the vocals this time around, but the stage show will feature actual actors playing these roles.

(Click on the title to hear the song. Play it loud.)

This entry was posted in All That Jaws, process and tagged erik petraitis, los angeles, music, sample. Bookmark the permalink.